Another Vintage Year for Blackstone CEO

Phoenix – The past 12 months have been eventful for Blackstone President & CEO Dan Swindall, featuring several key events that added to his growing list of career accomplishments. Dan is in his 23rd year of guiding Blackstone from a company on a shoestring budget of just $500 and his kitchen table for a desk, to a multimillion business delivering services in Arizona, New Mexico, Texas, Colorado and California.

Dan is serving an unprecedented fifth consecutive term as Chair of the Board of Officers for the Arizona Private Security Professionals’ Association. As such, Dan was asked to discuss issues critical to Arizona’s security industry on a legislative panel at the Arizona Association of Licensed Private Investigators’/Arizona Process Servers’ Association annual conference. Also on the panel was State Rep. Vince Leach, R-Dist. 11; then-Capt. Stephen Enteman, former head of the DPS Licensing Division; Rich Robertson, legislative liaison for AALPI; Ron Ezell, APSA: and AALPI President Dana Young, who moderated the panel. 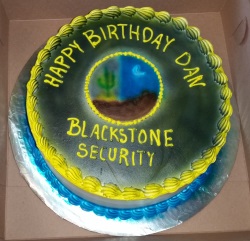 After celebrating his 57th birthday, Dan was once again recruited for the third time in four years by the Arizona Better Business Bureau to serve on the BBB’s Business Ethics Selection Committee earlier this year. Dan’s run was capped off by his appointment to the DPS Private Investigator/Security Guard Hearing Board.