The veteran of more than 20 years in the security industry said the award was unexpected and that she was honored to receive it. “I didn’t expect anything like this would happen to me when I took the job,” she said. “I feel really honored to be selected.”

Bobby Holley, Blackstone’s manager of the North Texas Region, said Division 53 was surprised at the selection mainly because of the short time (18 months) it has been operating. “But at the same time it came as very little surprise that Security Officer Benoy would have been selected due to her daily performance and the way she sets the example for others,” Holley said. “I am so proud of her and so are the other security officers in the division.” Holley added that the client she is working for offered his congratulations also.

A Dallas native, Pat has worked for several security companies but says none are as good as Blackstone, because Blackstone genuinely cares about its employees. She recounts an episode when her adult daughter, her only child, was in the hospital seriously ill with pneumonia, a stomach infection and blood clots. Doctors had to put her daughter in an induced coma. “The company let me go to the hospital at a moment’s notice when they put her in a coma so I could be there,” Pat said. “My coworkers were very supportive. I think of them as part of my family.” Pat’s daughter has since been released from the hospital. 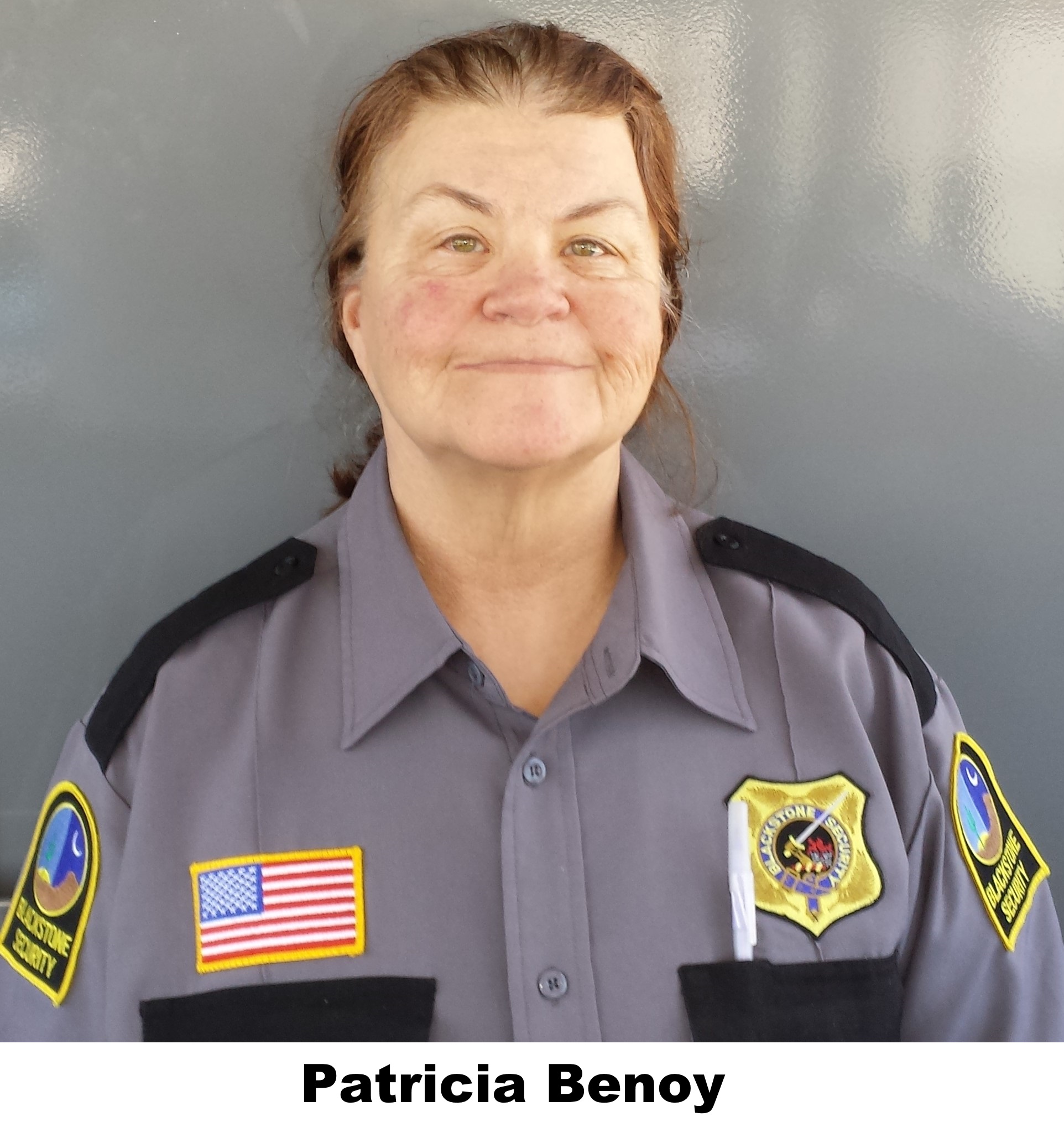 Holley said Pat’s first assignment was as a guard working a construction gate. During that time she was required to conduct checks of large vehicles making deliveries to the facility. Her work area consisted of a temporary gate house, port-a-john and a temporary manual gate.

“Security Officer Benoy spent many hours wading through mud and puddles caused during one of many flooding days in the Dallas/Ft. Worth area and never shirked her responsibilities,” Holley said. “One never heard a single complaint from her of the difficulties she faced on a daily basis unless it affected her ability to complete the mission.”

Holley said that after months of working in this type of setting, a brand new gate house and electronic gate system was completed and the guards shifted into a 24- hour operation. “Security Officer Benoy immediately took ownership of the gate house and surrounding areas as well as the company patrol vehicle,” Holley said. “She began to assume the role of gate supervisor and directed others in the required maintenance, duties and operations of the new equipment as well as the patrol vehicle. Security Officer Benoy inspects all documents produced at her gate and insists on corrective action from her other guards working the gate.”

Holley said that, in short, Pat has stepped up, taken ownership and provided leadership while serving as an example to all fellow guards. “Security Officer Benoy has accomplished all of this on her own initiative and continues to do so, even when her daughter was hospitalized and in serious condition,” Holley said. “Security Officer Benoy insists on continuing her duties and setting the example in the most stressful of times. We in Division 53 are very proud of her!”

Benoy was selected in a blind vote by the company’s Employee Satisfaction Committee. Members of the committee read the recommendations submitted by division managers. All identifying information was removed so committee members did not know who they were voting for, who was recommending them or the division where the candidates worked.