Gallup, New Mexico – The students here call her, “Sarge.” The school principal calls her “outstanding,” and her supervisor calls her “dependable and personable.”

She is Blackstone Security Officer Virginia Tsosie, and she has mastered one of the most challenging posts that any law enforcement or private security officer can draw as an assignment – high school security.

At a time when school districts across the nation are turning up the volume on student safety by hiring private security officers to supplement sworn school resource officers, Officer Tsosie has mastered the art of transitioning from standing a post to operating in an educational environment. Educational environments are the most difficult for any security personnel because besides protecting students from lethal incursions, you must be able to distinguish a disciplinary problem from criminal activity.

Tsosie, who lives and works in the Sheep Spring community she serves, has gained the respect and admiration of both students and staff at Newcomb High School, on the Navajo Reservation.

“She’s just an outstanding community member and security guard,” said Newcomb High School Principal Tamera Allison. “What makes her effective is she helps us enforce school policies and she’s very courteous with students. The students know and respond to her. Even the high school boys listen to her because they respect her.” 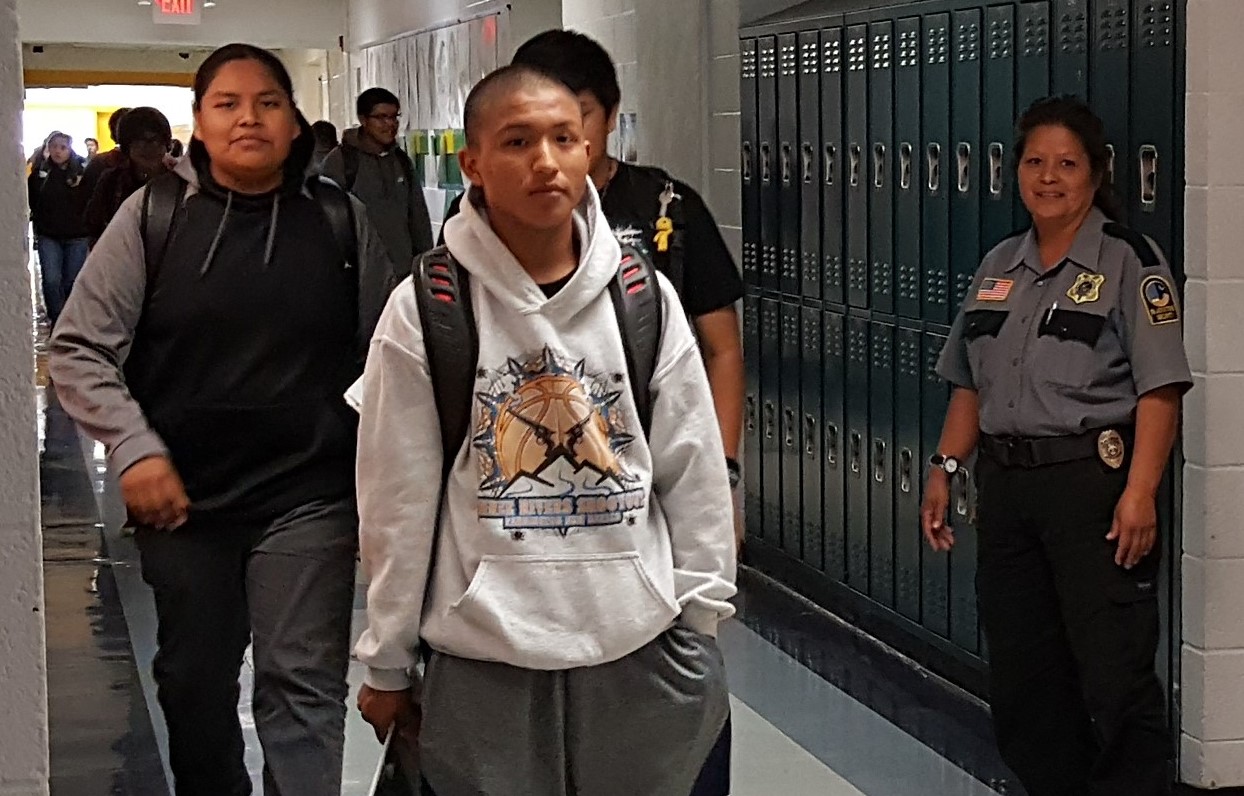 Tsosie, who was Blackstone’s Officer of the Quarter for the Albuquerque/Gallup region last fall, said she enjoys being there for staff and students and making sure the school is safe> “I like my job because It deals with the kids and I’ve known these kids since they were in middle school,” Tsosie said. “So now I know how to deal with them in high school.”

Allison said the school has had its share of threats of violence and vandalism appear on the social media but overall Tsosie has been up to the task. Allison said they have periodic fights just like any other school, but Tsosie handles those situations well. A second guard was added last fall, but Tsosie acts as the lead security officer.

“She takes the lead role because she is familiar with the community, students, parents and school policies,” Allison explained. “She has a friendly but commanding presence about her. What makes her even more credible with students is she knows them by name.”

The second security officer is Darvin Legah. Darvin, also a member of the Navajo Nation, is in his second year with Blackstone.

Allison said Tsosie’s presence is even more important because the school does not have school resource officer patrolling its hallways. “A lot of students know she’s here to keep them safe so they respond well to her,” she said. “If someone is confrontational with a teacher, she talks to them and they back off. What makes her job even more challenging is there is no school resource officer here. We are on the Navajo Reservation and they are understaffed. So, when we make a call to them sometimes it takes a while for them to respond.”

School Resource Officers are sworn law enforcement officers who have received the additional training to interact effectively in an educational environment. The former president of the National Association of School Resource Officers, Kevin Quinn once said that “just because someone is a good cop, does not mean they’ll be a good school resource officer.”

Tsosie is successful because she has received training, but not specifically school resource officer training. A mother of six children and grandmother of six, she depends on instinct and her familiarity with the community, which is in keeping with Blackstone’s policy of hiring from within the communities the company serves.

“I went to a women’s self-defense training class through the Farmington Police Department for another job before I took this one,” she explained. “I took different classes on how to use self-defense and we were trained in the use of pepper spray.”

Tsosie added that when she first got into the schools, she was simply given instructions and turned loose. “The kids tested me at first,” she said. “But a year later when they realized I wasn’t going anywhere, they began respecting me for who I was.”

Tsosie’s supervisor, Blackstone Area Manager Scott Clark, described her as a dependable employee who always goes above and beyond her duties. “She is constantly on patrol in the hallways and classrooms,” he said. “She is also very personable. I have observed various interactions between Virginia and students, and I see a very high level of respect from both staff and students.”

Clark said Tsosie is always willing to go the extra mile and takes her duties very seriously. He said she knows she is on-site to provide security to staff and students. “I never worry when Virginia is on duty as I know that she will perform her duties as a professional and will follow all procedures as requested by the client,” Clark said. “I am honored to have a person of this caliber working with me, providing the best security services in this environment that we can.”